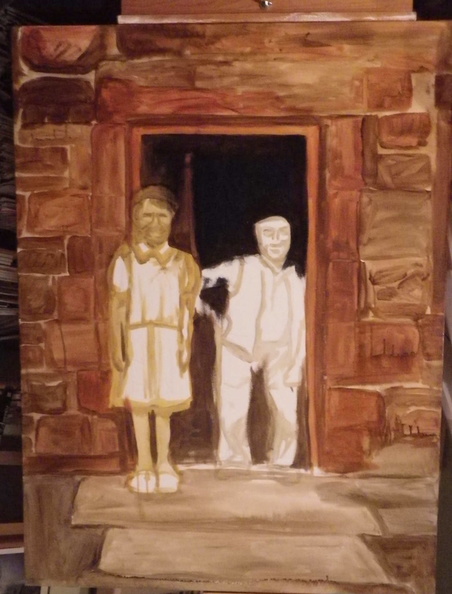 My husband grew up on this farm. The building is actually a group of stone buildings surrounding a cobbled courtyard. It is in northern England and was built over 500 years ago, at a crossroads along the old road to Carlisle from Newcastle Upon Tyne. The farmer and his wife, Tom and Daisy Davidson were the hard working couple that worked the farm. They had dairy cattle, sheep, horses, pigs, large vegetable gardens, fields of grain, turkey and chickens, and working sheep dogs. Tom and Daisy never took holidays, never traveled further from home than the city of Carlisle. They had three children, all grown and moved on by the time I met the Davidson’s.

Daisy did all the baking, cooking and canning that stocked the larder off the kitchen. The floors were flagstone throughout the house, with pathways worn over areas most used. I loved to hear them talk of their life on the farm, the hard work, and love of the land. There was always a big smile on Tom’s face when he told of the record breaking potato harvest, or the new pups old “Fly”, the border collie had just birthed, or what every new and wondrous thing had happened that day. Daisy was always more matter of fact and grounded, just ask her about when they got the water closet. It wasn’t plumbed into the house but into the old unused milking parlour next to the house.

Apparently it just wasn’t natural to have the place one sleeps and eats, have an outhouse in it. I liked to watch their faces as they chatted about the old times on the farm. From 2:30 to 3:30 pm the farm hands (including my husband) and Tom, Daisy and family would gather for their supper (late lunch) in the huge kitchen. Talk about the workings of the farm and repairs needed, conversations about the politics of the day, the price of milk, filled the air. All conversation ceased at 3:00 precisely because, with the new fangled telly, came Coronation Street. Supper was finished just as it came up to 3:30 and so was Coronation Street. Then it was back to the business of running a large, successful farm. When my husband is giving the grandchildren a lecture on what it takes to be happy and successful in their lives, he always uses Cross House Farm, and Tom and Daisy as examples of what it takes.

The painting is on a stretched linen canvas about 3 feet by 4 feet, primed with gesso. The under-painting is done in gel medium mixed with acrylic colour. I will be finishing the entire painting in acrylics. I have started with their faces because I feel that getting that right is key. No use getting all the rock work done around the door, finally getting to the faces and struggling to get them right. Tom‘s face holds all the character of a man that has spent a life time outside in all seasons, he is tanned, and always smiling. I started with him and will move onto Daisy (her real name was Mary Davidson but young children couldn’t say Mrs. Davidson, so she got Daisy). Then I will do the clothes. There were two pairs of boots lying on the cobblestones to the right of the door. I wanted them to wear their regular work clothes but they drew the line at boots. I may just sneak them in anyway. Stay tuned November 26, 2013